How Wasps Behave In The Autumn Months 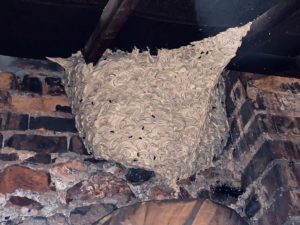 For us humans the Autumn months are the worst for wasps as this when both the wasps and their nest become more troublesome. People get stung more often during the autumn and treatment for the sting also take longer to work. This is because the wasp’s behavior starts to change during the Autumn months, the worker wasps have a lot more time to forage which in turn brings them into contact with humans much more frequently. Their diet also changes from a high protein, mainly insect-based diet to one that consists of gorging on carbohydrates and sugars. A particular favorite of wasps is fermented fruit, which also affects the wasp’s behavior and causes them to act more aggressively as they become drunk and tend to go on a bit of a rampage!

The days in autumn also start to get shorter which also effects wasp behavior in two ways. The first is that they are a lot busier during the day due to shorter daylight hours, they spend more of they daytime eating outside the nest than what they do inside the nest feeding the Larvae and maintaining the nest. The second reason is that the original queen of the nest will die at this time of year leaving the nest with significantly less discipline and the workers with no real direction so in essence they just do whatever they want! This also effects hornets in the same way.

It is common for us to get calls during the autumn from customers saying they are finding wasps in rooms that they say are completely sealed. What is usually the case is that wasps will find light and head straight towards it, this can be anywhere, cavity walls, lofts, small cracks in the skirting boards or walls that lead into that particular room.

The drop in temperature is another factor that effects the wasps, the cooler temperatures cause the wasps metabolism to slow meaning any insecticides used take longer to take effect and kill the wasps. Not a bad thing from the wasp’s perspective, but for those of us that want rid of the wasps quick this can be very frustrating!

So, if you have just discovered a wasp nest at your property it is well advised that you get it treated by a professional as soon as possible to make short work of the wasp infestation. Leaving it longer will not only increase yours and your family’s chances of getting stung, but the wasp nest removal process may take a lot longer as it starts to get cooler.

If you or a family member have an allergy to a wasp sting then it is advised not to approach the nest, if it is outside then close al windows and doors to prevent them from coming in and if you have discovered it in the house then try and seal off that room to keep them contained. Then contact a pest control professional immediately on discovery so that it can be dealt with promptly and you and your family are no longer at risk of being stung.

If you require more advice about wasp nests or you have a wasp nest that needs removing, then contact Advance Pest Control Bristol today – 0777 150 3107