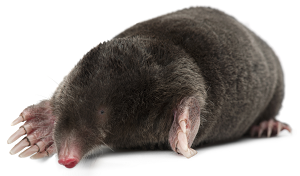 Mole control is an all year round problem and although they are rarely seen it is easy to spot a mole problem by the molehills they create. If moles are causing a problem in your garden, flowerbeds or vegetable patch then there are measures that can be taken to control or move them elsewhere.

Moles live most of their lives underground and are rarely seen on the surface. They dig underground tunnels to move around in and the excess soil is pushed to the surface creating a molehill.

Moles are carnivores; they feed on earthworms and other invertebrates that find themselves in the moles tunnel systems, so any damage to plants or crops are just an inconvenience to us caused by their lifestyle.

If you find molehills on your lawn they need to be removed before you can mow, also any collapsed surface tunnels require filling in to keep lawn surface level.

Moles are active all year round but it is at its peak during late winter into early spring.

Common signs for mole activity are the molehills created by the excess soil form building tunnels, also roots of seedlings and flowerbeds may be disturbed by tunnelling moles.

Mole Traps – traps can be bought from garden centres to kill moles causing you problems. If used correctly these traps are considered a humane method of control. If you are unsure on how to properly use the trap then it might be worth considering a professional pest controller to come out and deal with your mole infestation.

How to use a trap

Live capture traps are also available these must be checked at least twice a day so that the mole can be released before stress or starvation kills it. If you catch a live mole it should be released at least one mile away from where you caught it and you must have permission from the landowner and the environment in which it is released must be suitable to support the moles lifestyle.

Mole netting – You can buy mole netting to prevent mole coming to the surface and creating molehills, however these need to be installed before turf is laid.

Electronic Devices – electronic devices emit a buzzing sound that drives the moles away, although this may just be to another part of your garden.

If you are unsure on how to use any of these methods or are unsuccessful then you should call out Advanced Pest Control Bristol to come out and remove the moles professionally. Call us on 0777 150 3107