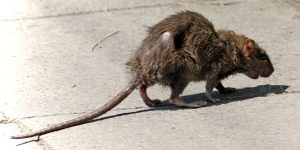 A bite or scratch from a rat can result in rat bite fever and disease. Rat urine is also known to spread leptospirosis which can lead to kidney and liver damage. A viral infectious disease known as Lymphocytic Choriomeningitis (LCMV) can be transmitted via the urine and saliva of rats. In some the effects of LCMV are short term and uncomfortable but in others the effects can last much longer.

One of the most well know and historically dangerous rat borne disease is the bubonic plague, also known as the black plague. This was transmitted when fleas carried by rat’s bite human hosts. The fleas that travelled on the rats are thought to be responsible for this plague in the middle ages that killed millions of people. From the bubonic plague to hantavirus and typhus, rat infestations are proven to be harmful to human health.

Rats can also trigger allergies. Their droppings, skin and hair can cause people to sneeze and suffer other allergic reactions.

Leptospirosis – bacterial disease transmitted by coming into contact with or drinking contaminated water, people that work outdoors with animals are most at risk of this.

Rat Bite Fever – this is transmitted via a rat bite, scratch or contact with a dead rat.

Salmonellosis – this is transmitted via consumption of food or water contaminated by rat faeces.

Hantavirus Pulmonary Syndrome – This is a viral disease, it can be transmitted in three ways, direct contact with rat urine or faeces, inhaling dust contaminated with rat urine or droppings, and less commonly, a rat bite.

To avoid catching diseases transmitted by rats it is important that you first deal with the infestation. This can be tricky, so it is a good idea to contact a pest control professional. They will be able to determine where the infestation is coming from and decide on the best treatment to get rid of the rats. When the infestation has been dealt with it is important to remove any nesting materials and faeces from your home. Spray any areas you think the rats have been with disinfectant to avoid anything becoming airborne. Use gloves when cleaning up urine and faeces.

If you are having trouble with rat or mice at your property, then contact Advance Pest Control Bristol today – 0777 150 3107