5 Ways To Keep Wasps Away From Your Property in 2022

How do you keep wasps away?

Wasps and bees have many differences the main one being that bees feed their larvae pollen, and wasps feed their larvae insects. So, this actually makes wasps really good to have around your garden as they help control other insects. National Geographic revealed that some farmers even use wasps to help protect their crops. And though many people believe otherwise, wasps do actually pollinate plants just not quite to the same extent as bees.

With all this said and understanding how much wasps can actually benefit your garden wasps are still considered a pest. This is mainly down to the fact that wasps do sting and can do so multiple times, and in some people even cause severe allergic reactions. This is why Advanced Pest Control Bristol have put together a handy guide on how you can deter wasps from building a nest around your property.

Research has shown that a combination of clove, geranium and lemon grass essential oils effectively repels wasps. You can combine several drops of each oil in soapy water then transferring it to a spray bottle. You should spray any areas of your property wasps are likely to build a nest such as, roofs, eaves, sheds, ledges, and any other cracks and crevices around your property.

Peppermint oil is also known for being an effective wasp repellent. You can use the same method as described above to help try and deter wasps from building nests around your property. If you enjoy a bit of gardening, you may want to try adding peppermint plants to hanging baskets and planters around your home. There are various scents that can be used to keep wasps away!

Wasp traps can be quite effective. They work by attracting the wasps inside with something appealing such as sugar water, and once inside the wasps can’t escape. You can make your own wasp trap simply by cutting off the top of a 2-litre bottle and inserting it inside the bottom of the bottle as shown here: 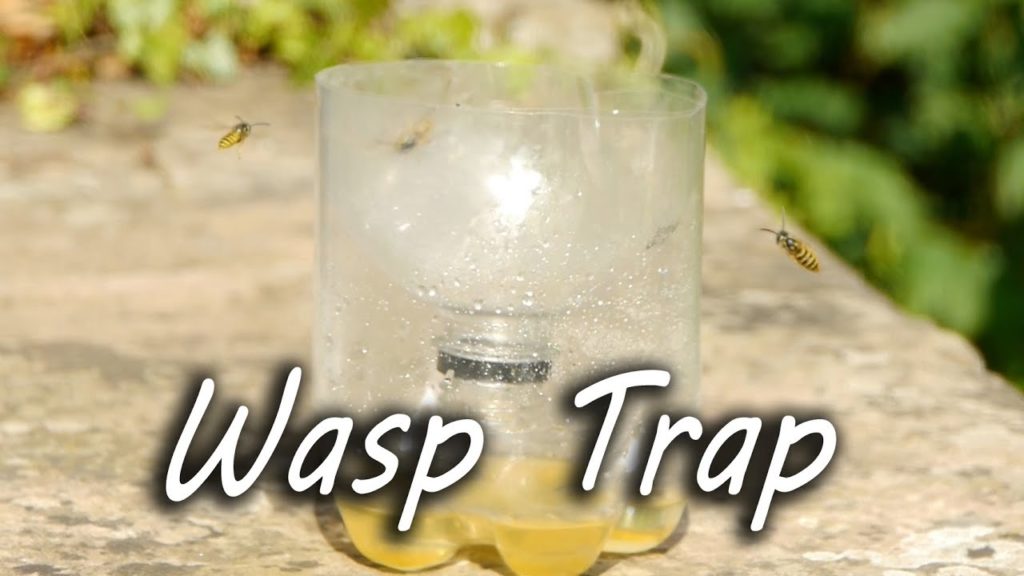 If you don’t fancy making one yourself, they can be purchased online, some are even made of coloured glass and look more like attractive garden decorations than traps.

It must be said though that traps may not be that effective when it comes to preventing wasps from building their nests as they can just be catching wasps just passing through your garden as oppose ones that are building a nest!

Check around your property and seal of and cracks or holes so that wasps have no access to build a nest. If you find that wasps have already started building a nest in your walls then don’t seal it off. The wasps won’t die off if you seal of the entrance they have used they will just simply find a new way out, through vents for example, they can even chew through dry wall!

Research has shown that wasp problems tend to be worse around properties that have large amounts of waste exposed in bins, recycling and even compost. To avoid this becoming a problem for you make sure lids to all bins are sealed tightly so there is no access to the wasps to get to what they see as a never-ending food source.

If you have trued these DIY tips and are still having problems with wasps or you have discovered an already established wasp nest, then contact Advanced Pest Control Bristol today for help with wasp nest removal – 0777 150 3107